History of the Water Tower 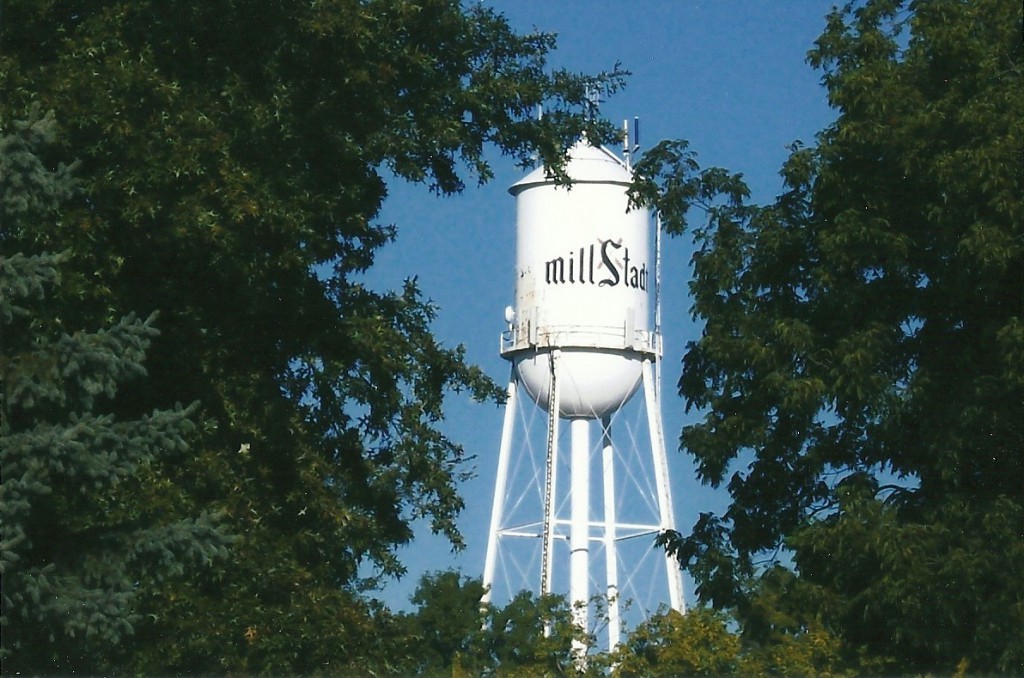 One of the more visible and well known local landmarks is the Old Water Tower, located behind the Community Center on land formerly known as Firemen’s Park. The 100,000-gallon steel tower was built in 1931, following the five-year long “battle” that took place in Millstadt over the construction of the village sewer line. One group of progressive minded citizens wanted a public sewer system, while opponents were against it. The Illinois Supreme Court finally ruled in favor of the public sewer system. Construction, however, did not go smoothly as labor unrest occurred. Shortly after work began on the 25,000-gallon concrete reservoir behind the Village Hall, “an armed mob of more than 100 men” showed-up, threatening workers, forcing them off the job. The issue was that eight of the nine local laborers had agreed to work for less than scale, which was $.75 per hour. The Illinois Supreme Court was again involved, this time ruling that the state wage agreement was unconstitutional. Construction resumed and proceeded quickly, as the Weil-Kalter Rayon Factory would not begin production at the addition to their plant until the water system was finished, enabling their sprinkler system. In one day, over 500 rivets were put in place on the Water Tower. When finished, the new Tower received a coat of red paint inside, and an outside coat of aluminum paint, making it “one of the attractive points in St. Clair County”. The deep well was located near the reservoir, and had a pump that produced 55 gallons of water per minute, for eight straight hours. The pump house had a concrete floor, with a stove and chimney to keep the pump from freezing.
The Millstadt water system has undergone changes through the past 82 years. In August 1939, with the help of WPA labor, a light was placed at the top of the Tower along with directional signs indicating the distance to Scott Field. The 500-watt light could be seen from the Municipal Bridge in St. Louis and as far south as Waterloo. The light was turned off during World War II to conserve electricity, but was back on in January, 1946. In 1954, the 300,000-gallon storage tank behind the Municipal Building was built, and the Tower received repairs and new paint. This work was done at night because of the excessive heat in the summer of 1954. Deep wells, a total of ten, continued to supply the water until 1976. At that time a water line was constructed from Belleville to Millstadt replacing the wells. The Tower received a coat of blue paint in the late 1960s, and the color was changed to its current off white in 1997 when the Millstadt logo was added. The concrete reservoir was razed in late 1991, and replaced with the current water shed, which houses the pumps, behind the police station.
But now the Tower needs your help. Landmarks Illinois has recognized the Tower’s importance, and has added it to its list of “Ten Most Endangered Historic Places for 2014.” Although the original plan when the new tower was built was to save the Old Tower, plans have changed. Saving the Tower is bigger than one person or one organization – but not bigger than Millstadt!! We don’t have a lot of time. The “Friends of the Old Millstadt Water Tower” has organized and is looking for ways to make the Tower self-supporting. Thanks to Scott O’Neill, a licensed structural engineer and owner of Ox2 Engineers, we have an engineering report, at no cost to the taxpayers of Millstadt, and it states that “the Tower is in good structural condition. Once the Tower is repainted, then the structure would be considered in excellent condition.” Please help by joining the “Friends of the Old Millstadt Water Tower”, or see our Face Book page “Save The Millstadt Water Tower”. Let’s all work together to “HELP SAVE THE TOWER!!”

One thought on “History of the Water Tower”